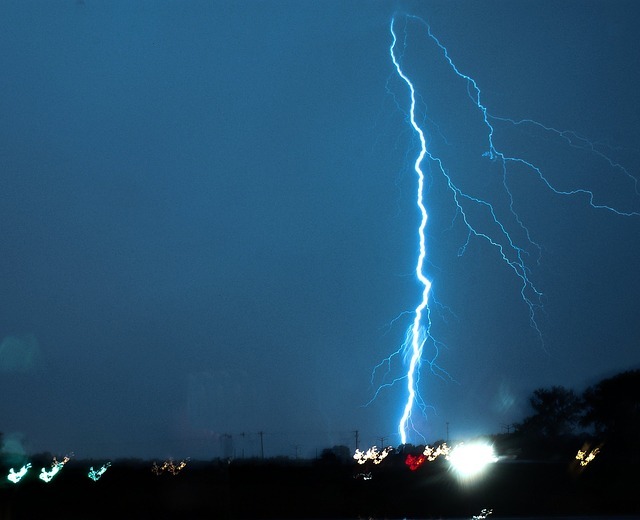 With 1,800 thunderstorms in progress at any given time on Earth, it’s important to be able to sort out the myths from the facts when it comes to lightning safety. And keep in mind that the best lightning safety plan of all is to take shelter in a house or other structure, or a hard-topped fully enclosed vehicle during a storm: “When thunder roars, go indoors!”

Fact: Lightning often strikes the same place repeatedly, especially if it’s a tall, pointy, isolated object. The Empire State Building was once used as a lightning laboratory, because it’s hit nearly 25 times per year, and has been known to have been hit up to a dozen times during a single storm.

Fact: Lightning is indiscriminate and it can find you anywhere. Lightning hits the ground instead of trees, cars instead of nearby telephone poles, and parking lots instead of buildings.

MYTH 3 – IN A THUNDERSTORM, IT’S OK TO GO UNDER A TREE TO STAY DRY

Fact: Sheltering under a tree is just about the worst thing you can do. If lightning does hit the tree, there’s the chance that a “ground charge” will spread out from the tree in all directions. Being underneath a tree is the second leading cause of lightning casualties.

Fact: Most vehicles are safe because the metal roof and sides divert lightning around you. The rubber tires have little to do with protecting you. Keep in mind that convertibles, motorcycles, bikes, open shelled outdoor recreation vehicles, and cars with plastic or fiberglass shells offer no lightning protection at all.

MYTH 6 – IF YOU’RE OUTSIDE IN A STORM, LIE FLAT ON THE GROUND

Fact: Lying flat on the ground makes you more vulnerable to electrocution, not less. Lightning generates potentially deadly electrical currents along the ground in all directions, which are more likely to reach you if you’re lying down.

MYTH 7 – IF YOU TOUCH A LIGHTNING VICTIM, YOU’LL BE ELECTROCUTED

Fact: The human body doesn’t store electricity. It is perfectly safe to touch a lightning victim to give them first aid.

Fact: The presence of metal makes virtually no difference in determining where lightning will strike; height, pointy shape and isolation are the dominant factors. However, touching or being near long metal objects, such as a fence, can be unsafe when thunderstorms are nearby—if lightning does happen to hit one area of the fence, for example, the metal can conduct the electricity and electrocute you, even at a fairly long distance

MYTH 9 – A HOUSE WILL ALWAYS KEEP YOU SAFE FROM LIGHTNING

Fact: While a house is the safest place you can be during a storm, just going inside isn’t enough. You must avoid any conducting path leading outside, such as corded telephones, electrical appliances, wires, TV cables, plumbing, metal doors or window frames, etc. Don’t stand near a window to watch the lightning. An inside room is generally safe, but a home equipped with a professionally installed lightning protection system is the safest shelter available.

MYTH 10 – SURGE SUPPRESSORS CAN PROTECT A HOME AGAINST LIGHTNING

If you live in Beaverton, Portland, or throughout Oregon, or Washington contact us at Fox Insurance Agency. As an independent agency, we can provide quotes for auto insurance, homeowners insurance, and other insurance products from several highly regarded, nationally known insurers. Call today. We are always ready to discuss your insurance, and would be happy to help you find a policy that suits your needs. You may even save enough on your insurance premiums for your honeymoon! Contact Fox Insurance today 503-277-2300.

The information in this article was obtained from various sources and is not all inclusive regarding the subject matter. This content is offered for educational purposes only and does not represent contractual agreements, nor is it intended to replace manuals or instructions provided by the manufacturer or the advice of a qualified professional. The definitions, terms and coverage in a given policy may be different than those suggested here and such policy will be governed by the language contained therein. No warranty or appropriateness for a specific purpose is expressed or implied. Content provided by Insurance Information Institute.